A simple way to use GitHub Actions to build your Python package, bump the version number, and publish it to GitHub releases and PyPI.org all with a single click of a button in the web interface.

When I want to publish a new release of one of my Python packages I just browse to my release.yml workflow in the Actions tab and click the Run workflow button:

This runs a GitHub Actions workflow that increments the patch version number, creates a new GitHub release with auto-generated release notes, creates a corresponding git tag, and publishes the release to PyPI:

If I feel like it I can create a new release manually using GitHub’s web interface instead. This allows me to choose my own version number (in case I want to bump the major or minor version instead of the patch version) and lets me write my own release notes (or I can use the Auth-generate release notes button to get GitHub’s auto-generated release notes). Manually-created releases still trigger the GitHub Actions workflow that builds the package and uploads it to PyPI: 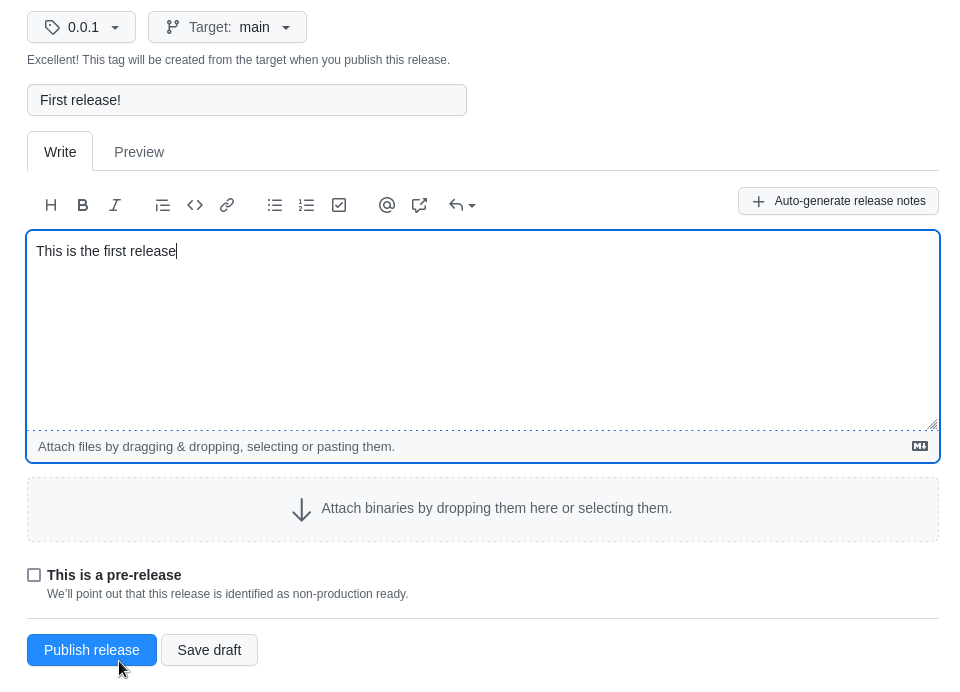 In fact GitHub releases created by any means trigger the package build and upload workflow. For example I could run GitHub CLI’s gh release create command from any directory on my local machine. This doesn’t require me to have a local copy of the project or to have anything setup locally other than GitHub CLI itself:

The rest of this post will walk through setting this up. It’s all very simple and easy…

We’re going to be using github.com/seanh/gha-python-packaging-demo/ as an example. The example repo contains a Python package with all the tooling needed to implement our GitHub Actions-based release process:

I’m gonna skip over setup.cfg because it’s just a normal setup.cfg file, it doesn’t contain anything relevant to our GitHub Actions-based packaging solution. The demo package’s setup.cfg is exactly like the setup.cfg from the Python Packaging User Guide’s packaging tutorial except that I added a changelog link (shows on PyPI and links to the project’s GitHub releases page) and a console script entry point (which we’ll be using later to demonstrate how to implement --version).

One thing worth saying is that your package’s name needs to be unique across all of PyPI, so visit pypi.org/project/YOUR_PROJECT_NAME/ and make sure your name isn’t already taken.

Here’s the contents of pyproject.toml:

This is the same as the pyproject.toml from the Python Packaging User Guide’s packaging tutorial but with the two parts in bold added. These two additions add setuptools_scm (following the instructions in their README).

setuptools_scm extracts the version number from the project’s git tags during the build process and injects it into the package that gets built. This means there’s no version number anywhere in the source tree. There’s no version number in pyproject.toml or setup.cfg or in the Python code. The git tags are the single source for version numbers. This is crucial to the packaging scripts we’ll be using below because it means you don’t need to create and push a git commit in order to do a release. You just need to create a new git tag. And GitHub does that for you when you create a GitHub release.

The publish.yml workflow below needs a PyPI API token to upload releases of your package to PyPI.

Create a free PyPI.org account if you don’t already have one, log in, go to your account settings, and go to the Add API Token page. You need to create an unscoped API token. You can’t scope the API token to the project yet because the project doesn’t exist on PyPI yet so it doesn’t appear as an option in the scopes dropdown. You can replace the token with a scoped one after publishing the project’s first release.

Add the PyPI API token to the GitHub project’s secrets

You need to add the PyPI API token to your GitHub project’s secrets to make it available to the publish.yml workflow.

Go to the GitHub project’s Settings tab, go to Secrets → Actions, and click New repository secret. Enter PYPI_API_TOKEN as the name and paste in the PyPI API token as the value then click Add secret:

publish.yml is a GitHub Actions workflow that triggers whenever a GitHub release is created. It builds the Python package and uploads it to PyPI. It’s 17 lines:

You can now create a GitHub release and it’ll trigger the publish workflow to build the package and upload it to PyPI.

Go to the GitHub project’s Releases page and click the Create a new release button. In the Choose a tag field enter 0.0.1 and click Create new tag: 0.0.1 on publish. Click Publish release:

Alternatively, instead of using the web interface you can install GitHub CLI on your local machine and run:

Either way publishing a release will trigger the publish.yml workflow and the package will be built and uploaded to PyPI. You can browse to the Publish to PyPI.org workflow on the project’s Actions page and view the logs.

You should also be able to browse to the project’s release history on PyPI and see that the package release has been uploaded.

Replace the PyPI token with a scoped one

Now that you’ve published the first release the project will start appearing in the list of scopes when creating an API token on PyPI. You can go back to your PyPI account settings, delete the unscoped token, create a new token scoped to the project, and update the value of the PYPI_API_TOKEN GitHub secret with the new token. 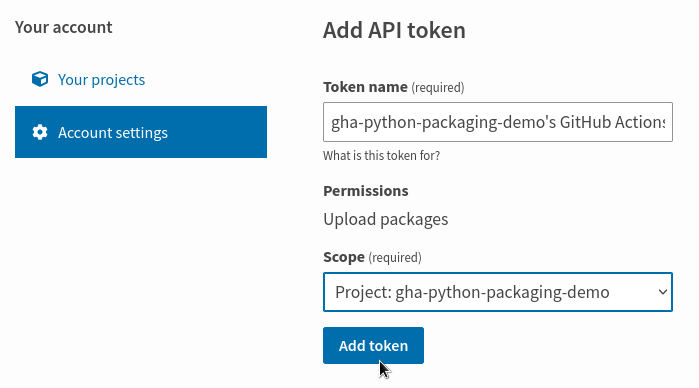 From now on each time you create a new GitHub release using either the GitHub web UI or GitHub CLI your Python package will be built and uploaded to PyPI.

You could stop here

We’ve gotten as far as being able to create a GitHub release with either the web UI or GitHub CLI and having that release be automatically built and published to PyPI. GitHub can even generate the release notes for us. And all we needed was setuptools_scm in pyproject.toml, a 17-line GitHub Actions workflow and a PyPI API token in the project’s GitHub secrets. This is really very simple and you could just stop here and keep using it.

Automatically generating the next version number

release.py is a short Python script that calls GitHub CLI to create new releases with auto-incrementing version numbers and auto-generated release notes. If the project doesn’t have any releases yet it’ll use 0.0.1 as the first version number. Otherwise it’ll +1 the patch number of the last release: 0.0.2, 0.0.3, and so on.

Make sure you mark this script as executable:

As long as you have GitHub CLI installed you can run this script locally. It should be compatible with your operating system’s version of Python and it doesn’t have any dependencies, so it should just work:

If you want to increment the major or minor version number you have to create a release manually to do that, then you can go back to using release.py and it’ll start generating patch numbers on top of your new major or minor numbers. (It would be easy to add --major and --minor arguments to release.py if you want to be able to use it to generate major and minor releases as well.)

To get this to work you need to create a GitHub personal access token and add it to the project’s GitHub secrets.

Go to your GitHub account settings, go to Developer settings → Personal access tokens, and click Generate new token. The token needs to have the repo scopes but doesn’t need any of the others. 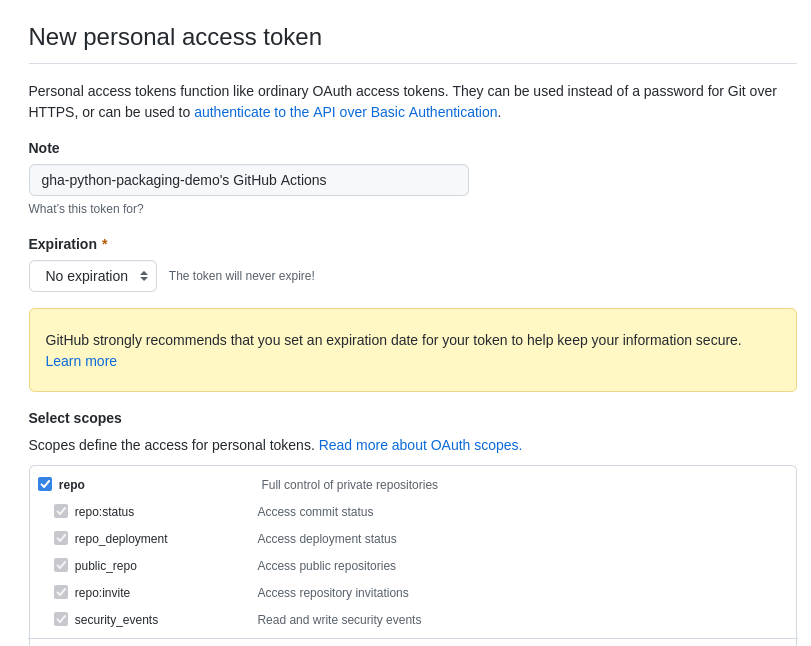 Then go to the project’s GitHub Actions secrets and create a new secret named PERSONAL_ACCESS_TOKEN with the value of the token you just generated: 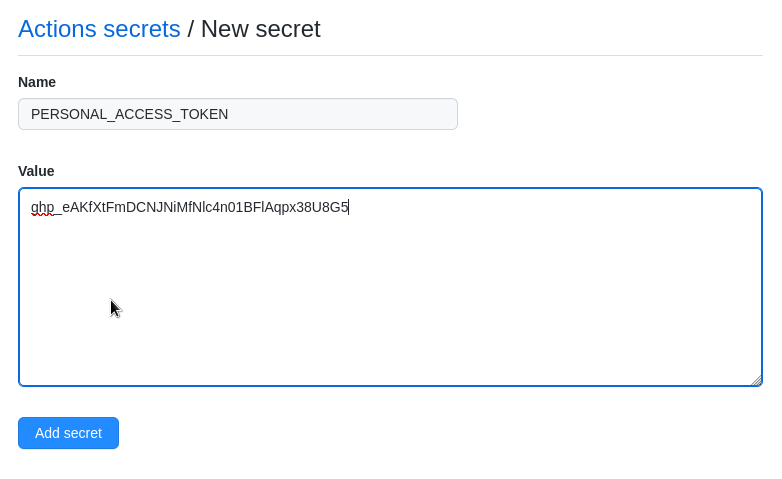 With the personal access token in place you can now trigger the release workflow from the project’s GitHub Actions page. Go to the Create a new patch release workflow and click the Run workflow button: 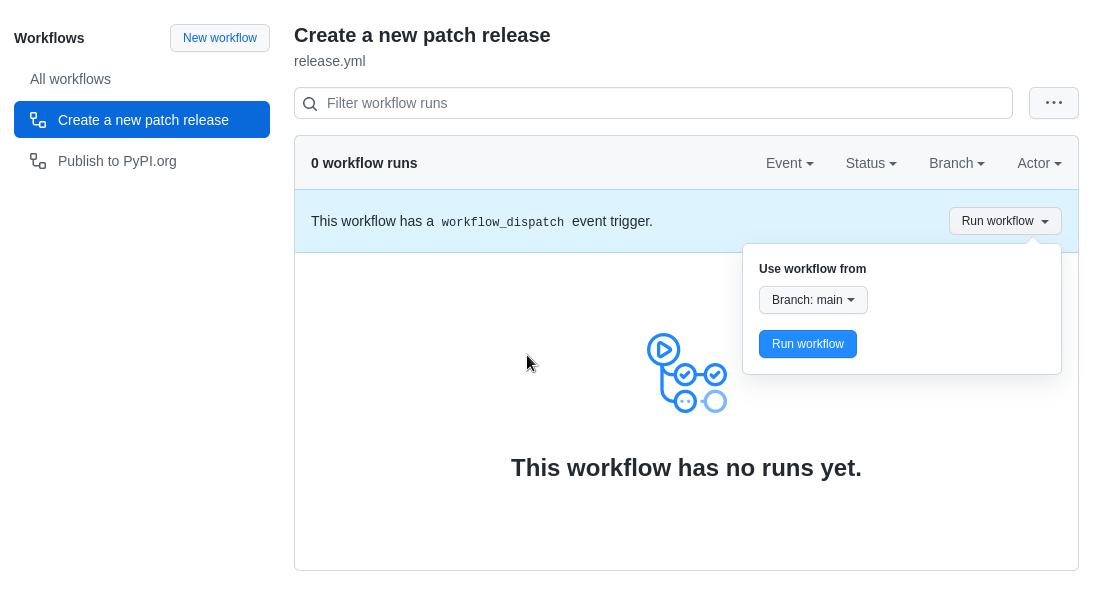 You just generated a new version number, created a GitHub release, built your Python package, and uploaded it to PyPI with a single click of a Run workflow button!

You just call importlib.metadata.version(). Here’s the relevant code from app.py:

If you install gha-python-packaging-demo and run gha_python_packaging_demo --version it’ll print the version number:

What if publishing to PyPI fails?

If a run of the publish workflow fails you’ll be left with a release on GitHub for which you don’t have a corresponding version on PyPI. You could just delete the release from GitHub (using either the delete button on the releases page or GitHub CLI’s gh release delete command) and try again. But you could also just browse to the failed run of the publish workflow in the Actions tab and re-run it. This run of the workflow is bound to the GitHub release that triggered it, so re-running the workflow will try again to build and publish the same release. The Re-run all jobs button will do (the workflow only has one job) or there’s also a Re-run this job button on the individual job.

There’s nothing in the demo to prevent broken code from being uploaded to PyPI. The demo app doesn’t even have any tests. This shouldn’t be difficult to fix: just have the publish workflow run your tests before uploading to PyPI.

If you download one of the source dist packages from PyPI and open the .tar.gz file you’ll see that it has a lot of unnecessary files in it: the .github directory (containing the GitHub Actions workflows), the .gitignore file, etc. Those files don’t need to be and shouldn’t be in there.

This is a known issue with setuptools_scm: using setuptools_scm causes all git-tracked files to be included in the sdist (thankfully the .git directory itself isn’t included). There’s nothing we can do about this (a MANIFEST.in file won’t work) and it doesn’t really matter: the files don’t cause any problems being there.

setuptools_scm misbehaves if a commit has multiple tags

If you have more than one version number tag attached to the same commit setuptools_scm won’t always pick the right tag (the newest one) to be the current version number. This can cause problems. For example if one of the version numbers has already been published to PyPI and the other hasn’t the publish workflow can end up trying to publish the already-published version number and getting an error from PyPI.

This is an edge case (why would you try to release the same commit twice with two different version numbers?) so it’s probably not important.