This post covers how to write your first, very simple Python unit tests.

How the test code is organised

The first thing you need to decide is where your new tests should go. Fortunately Hypothesis tests are organised in a very simple way.

When you run a test command, such as tox -e py27-h tests/h, pytest finds all *_test.py files in the tests/h directory (and subdirectories). For each test file pytest then finds all the top-level functions whose names start with test_ and runs them. Pytest also finds all the classes whose names start with Test and for each class runs every method whose name starts with test_. Any other functions or class whose names don’t begin with test are not run automatically by pytest, these are helper functions for the test functions to call. (For more about how pytest finds tests to run see the complete documentation for pytest’s test discovery rules.)

We often organise tests into classes in h, instead of just using top-level test functions. For example you might put all the tests for a module’s first function in one class, then all of the tests for the second function in a different test class, and so on. It’s easier to see where the tests for one function end and those for the next function begin if each function’s tests are indented under a class. Organising tests into classes also allows us to put helper functions, fixtures, patches etc (all of which we’ll see in later posts) in the classes that use them, which can reduce boilerplate and noise.

Exactly how we organise tests into classes varies. Sometimes it might be as simple as putting all of the tests for one function into one test class. Other times we’re writing tests for a class and put all of the tests for that class in one test class, or separate the tests for each of the classes methods into separate test classes for methods (this may depend on how big the class is and how many different methods it has). Sometimes it’s useful to use separate test classes to test the same code under different scenarios, for example TestLoginControllerWhenLoggedIn and TestLoginControllerWhenLoggedOut, because each test class can contain fixtures for that scenario (a test HTTP request from a logged-in user, or an HTTP request from an unauthorized user) that are applied to all tests in that class. Choose whichever approach works best for your tests.

Let’s look at a simple as possible example test first. h/accounts/util.py contains a validate_url() function that validates the URLs that users enter for homepage links in their user profiles. It’s the validation for the Link field in this user profile form: 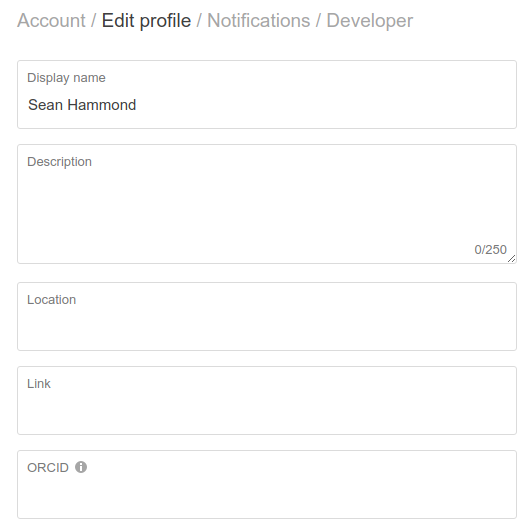 validate_url() raises a ValueError exception if the string provided by the user doesn’t look (vaguely) like a URL (this exception is caught by code further up and turned into an error message that’s shown to the user). If the URL does look valid then validate_url() returns it, possibly with http:// prepended to the front of the URL if it was missing.

The tests for this function are in util_test.py. Here’s a couple of very simple tests that test that validate_url() returns http:// URLs unmodified, and that it adds http:// to the start of URLs that don’t have it:

These are examples of the simplest possible test functions. They just call the function under test, passing in a certain argument to the function, and then use Python’s assert statement to test something about the function’s return value.

(For more about how the assert statement works, see Dan Bader’s Assert Statements in Python tutorial.)

When an assert fails pytest outputs useful information about the failure such as the values of the two sides of the expression (the result given by validate_url() and the result that the test had been expecting) and the differences between them.